This week’s featured ETF is GURU, Global X Guru Index based on a specific “smart money” hedge fund strategy. Guru’s site claims that the index engineered by Global X and provided by German customized index specialist Solactive AG allows everyday investors to access the high conviction investments among the largest, most sophisticated hedge funds in the world. It uses a proprietary methodology to access the highest conviction ideas from a select pool of hedge funds where the 13F holdings information is most valuable. In other words, GURU “indexizes” an active strategy to capitalize on changes in the quarterly holding positions of Hedge Fund “gurus.” Its objective is to serve as an alpha sleeve rather than as a diversified core equity holding.

An underlying rationale is believing that the highest conviction holdings of the most successful holdings represent “smart money” that can take advantage of stock mispricings caused by dumb money.  This includes retail investors and mutual funds. Empirically, that makes sense as studies during the past 40 years reveal relentless under-performance by the vast majority of active managers over 5-year periods. But will this be true for ETFs run by superstar managers? I’ve written an article available in the ValuEngine Library demonstrating that the much more efficient ETF Structure  levels the playing field for active managers.

Today we examine whether an index ETF based upon a consensus of “smart money” picks by “hedge fund gurus” is superior to active ETFs from fund company “investment gurus.”

We selected these three ETFs for the analysis:

The investment thesis of ARKK’s research-driven process led by Ms. Wood and her team is disruptive innovation. Companies within ARKK include those that rely on or benefit from the development of new products or services, technological improvements and advancements in scientific research. In fund classification terms, this can be thought of as aggressive growth. ARKK’s objective is to serve as an alpha sleeve rather than as a diversified core equity holding.

DBLV employs a fundamental value strategy. The investment team seeks to invest in classic value opportunities in low-multiple stocks of companies with temporarily depressed earnings and in quality value opportunities in durable or disruptor franchises. Please note that Mr. Gundlach is not directly involved in the management of DBLV; its Senior Portfolio Manager is Mr. Emidio Checcone who also manages several of DoubleLine’s traditionally structured equity mutual funds. DBLV can be deployed as a core equity holding or as a value sleeve.

TTAC selects “high quality” companies as identified by the firm’s proprietary free cash flow research and an ESG screen. Mr. Shea and his team utilize a disciplined active management process driven by quantitative models. TTAC can be deployed as a core equity holding or as a high-quality alpha sleeve.

Having set the stage, let’s take a closer look at the data behind the numbers to see how the GURU index ETF measures up to the three actively managed US equity ETFs we selected. The data is as of November 7, 2021.

VOO, the Vanguard S&P 500 ETF is used for comparative purposes. The bold numbers denote the ETF with the most favorable score in the category. 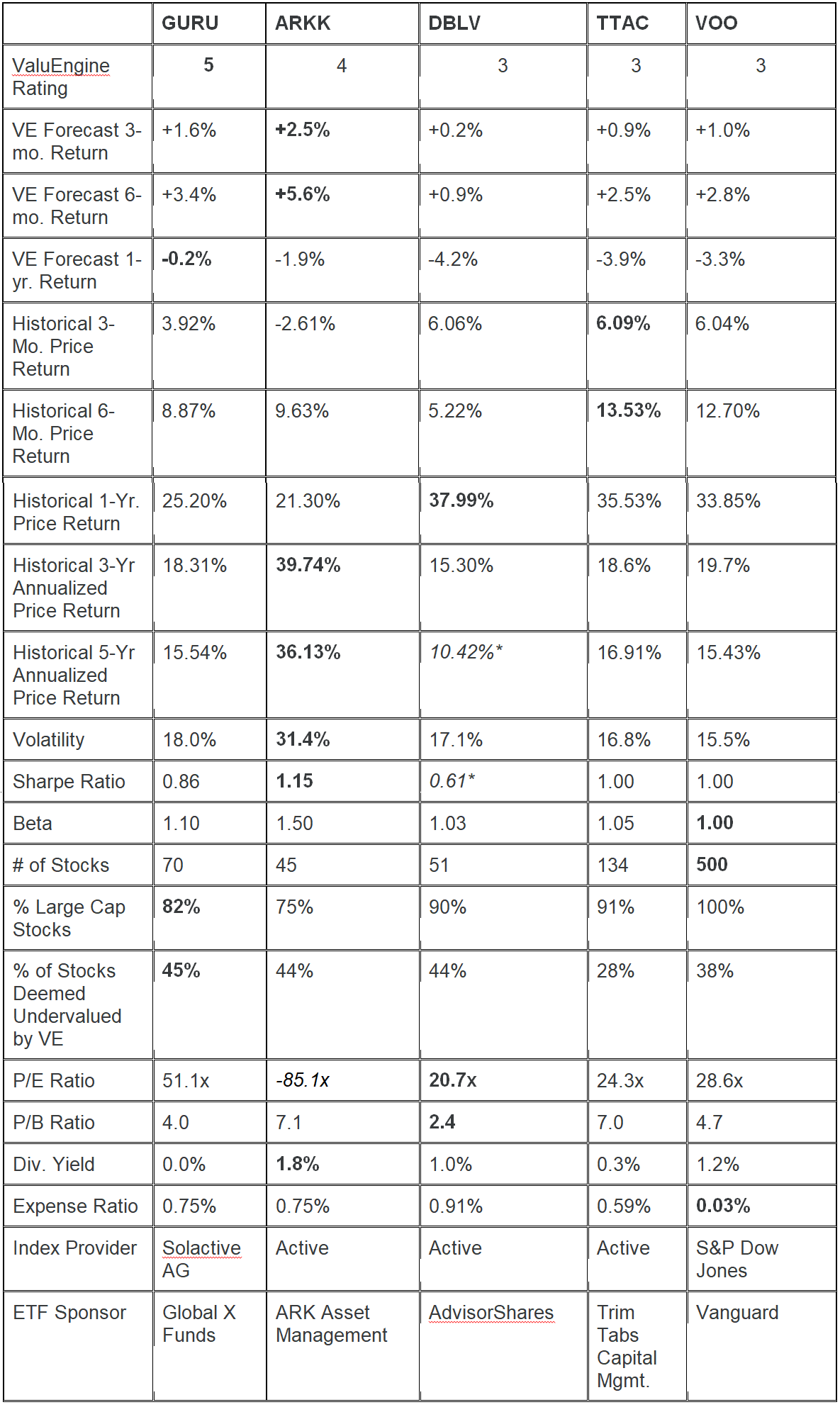 *DoubleLine did not take over management and rebrand the fund until October 11, 2018 so it does not include the prior fund’s performance prior to that date. I supply the number for historical completeness but agree it should be ignored when evaluating Doubleline’s managerial performance.

What does all of the above mean for investors?

The bottom line is that all of these ETFs are reasonable buys or holds. All three “guru-managed” active funds have done well relative to their benchmarks during most of the periods measured. This is with the provisions that you start DBLV’s performance when DoubleLine took over an under-performing fund and that you measure it against a Value Benchmark index fund rather than the S&P 500 with an understanding that with a six-month exception, value has been out of favor during the past 5 years. I believe both modifications are fair and that DBLV deserves consideration for a value sleeve. ARKK continues to be a strong recommendation for an alpha sleeve even after suffering significantly when its style was out of favor. TrimTabs’ TTAC has been and should continue to be a resilient and affordable actively managed alternative for shifting some core index money into active if desired. GURU gets our strongest recommendations to buy right now and hold for the next twelve months. It is not recommended as a core holding substitute.

Perhaps the biggest takeaway from this analysis is the departure from SPIVA research showing relentless under-performance by the vast majority of active managers including “”gurus.” Admittedly the sample size is small, chiefly because there haven’t been that many well-followed active managers who have shifted to the ETF structure until the 2019 ETF rule came into effect. The bottom line is during most historic periods, TTAC and ARKK outperformed and delivered superior or the same Sharpe Ratios as VOO. DBLV outperformed its Russell 1000 Value ETF as well. As for beating the market by using the highest conviction hedge fund holding using a strategy index, that worked well for GURU in 2017 and 2018 but not so well after that. Earlier I referred to my ValuEngine article (link at beginning of this post) on how the more efficient ETF structure levels the playing field for active managers. I urge you to download it and understand the differences for yourself. One game-changer that has added power to the new wave of actively managed ETFs is the fact that it is now possible to disguise trades by using semi-transparent basket tools such as “Shielded Alpha” from the Blue Tractor group.

This was a small sample size but provides evidence behind my research that moving to the ETF structure does indeed level the playing field vs. benchmark ETFs – especially ETFs with well-known managers sticking to their tried-and-true strategic disciplines.