Note most data as of late 2021 due to embargo period.

If too many shareholders redeem their, this can affect the ability to complete the transaction.  A minimum cash contribution exists for most deals.  For example, a deal could have a minimum cash contribution requirement of $100mn.  Let’s say a SPAC sold 20mn shares at $10/share and raised $200mn, but 75% of shareholders redeem.  Those redemptions result in the trust only having $50mn which is only half of the minimum cash contribution.  The SPAC sponsor may then have to seek a waiver or find other sources of cash to keep the deal from terminating.  The sponsor may seek to raise a PIPE, sell/contribute some of the sponsor shares, issue debt, or some other form of capital raising.

A recent example of this was experienced with Sustainable Opportunities Acquisition Corp (SOAC) which had announced its intention to acquire DeepGreen Metals for approximately $2.4bn.  The SPAC had raised $300mn through an IPO.  An additional $330mn was raised through a PIPE.  So, the SPAC thought it was bringing about $630mn to the table for the acquisition.  Unfortunately, greater than 90% of shareholders redeemed their shares, leaving only $27mn in the trust out of the original $300mn.  Not only did the trust shrink by 90%+ but some of the PIPE investors did not fulfill their investment, resulting in a PIPE that was $220mn smaller than expected.  In total between the redemptions and a PIPE shrinking, only $137mn of the original $630mn was available for the acquisition.  The deal terms required a minimum cash contribution of $250mn.  DeepGreen agreed to waive the minimum cash contribution, resulting in a much lower cash infusion for a company that is likely burning cash and possibly indicating how desperate the SPAC and target were to get a deal done.  The table above shows that the impact of dilution from the promote, warrants, and underwriters is greatly magnified when significant redemptions occur.

Another entry point for investor may occur after deSPAC.  DeSPAC refers to the process of the SPAC finalizing the acquisition and beginning to trade as a new entity, usually with a name that is associated with the target company and a new ticker.  A lot of the catalyst events (separation of the unit, target announcement, PIPE, forward guidance, redemptions, etc) are behind the company.  Liquidity also often improves some.  However, some catalysts still exist, including reporting of quarterly results, updating of guidance (many times a downward revision), and lock up expirations.  Some investors like to wait for the operational disappointment to occur and selling pressure from lockup expirations to subside and then focus on finding good businesses that are broken SPACs at a big discount.

To summarize, your interesting times that may be opportunities to invest in a SPAC exist at the following times

SPAC Stock Prices Are Falling and Redemption Ratios Are Rising

There are some current trends occurring in the SPAC universe that are not that favorable.  As mentioned earlier, SPACs have been seeing some significant redemptions.  These are not isolated events.  Redemption ratios are rising as seen in the two charts below.  Investors attributed to more SPAC stock prices that are trading close to trust value.  The data confirms this (see tables below).  At the end of March 2021, more than 70% of SPACs with targets were trading ABOVE their IPO prices.  However, in August 2021, almost the inverse was true as close to 80% of SPACs with targets were trading BELOW their IPO prices.  If SPACs are trading below their IPO prices, investors are going to want their full investment back and can get that by redeeming, pushing redemption rates higher. 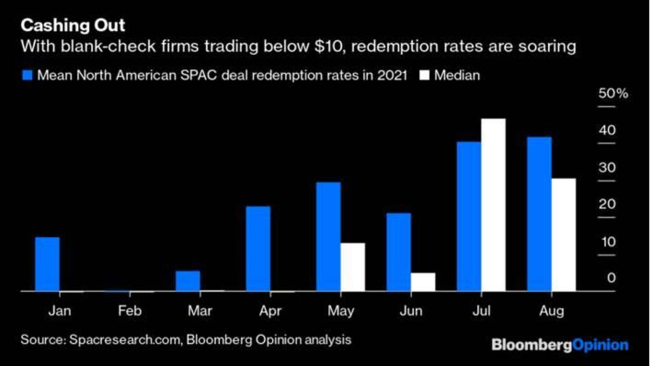 With the recent increase in redemption ratios, a unique investment opportunity may exist.  An increasing number of instances have occurred in the last month where out of favor SPACs are seeing massive stock price rallies.  For example, assume there is a SPAC with 10mn shares outstanding and 20% (2mn) of the shares are borrowed short.  Then, assume that 90% of shareholders redeem prior to deSPAC.  So, now there are 1mn shares outstanding but 2mn shares are short.  Consequently, approximately 1mn shorts may be forced to cover as the shares they borrowed have been redeemed.  Instead of 1mn shares trying to cover against a 10mn share float, it is now only a 1mn share float.  Moreover, the Reddit Army is identifying these situations and seeing the squeeze potential and buying these stocks.  There have been instances of stock prices jumping more than 100% in a day as the shorts have to cover and Reddit is also buying.  If investors can identify these opportunities, there may be substantial profits to be made.

Markets and Sectors Being Impacted

While a company in any sector can go public through a SPAC, many of the technology, healthcare, logistics, media, retail and telecom companies have used SPACs as a vehicle to get public that may not have otherwise.  These are typically companies that have little to not revenue, are not earning profits, and generate negative FreeCF.  Perhaps. the biggest beneficiaries have been cleantech, fintech, and EV related.  See the table below to see the diverse types of intended targets of the SPAC IPOs launched in the first half of August 2021 and the targets that were announced and deSPACs that occurred during the same period. 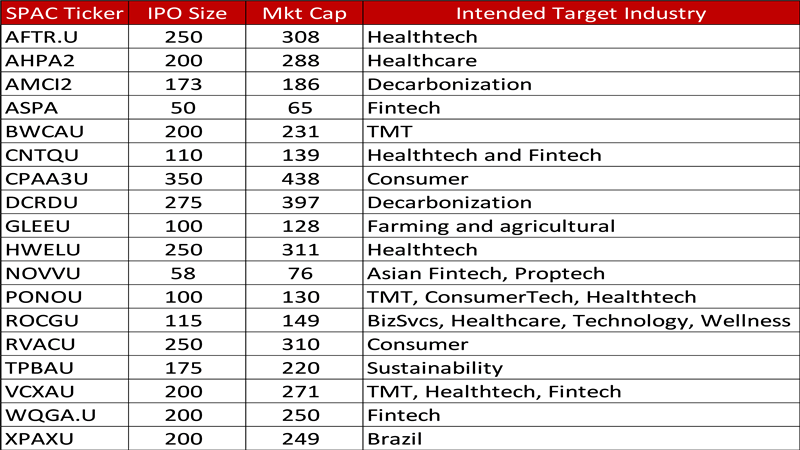 There are also some structures being pursued by sponsors that are similar to SPACs but are slightly different.  Sponsors are also trying to better align their interests with investors by further delaying lockups, structuring earnouts, etc.  One such structure is a SPARC.  In a SPARC, investors are not required to invest money up front, but rather receive a right to buy in once the investment vehicle announces a merger target.  This is not subject to any time limits, unlike the typical SPAC that has a 24 month time horizon.  Pershing Square pursued this structure with it attempted acquisition of Universal Music Group.